Nicholas Dlamini took another huge pedal stroke on his journey from a shack in the township of Cape Town to becoming the first black South African to ride in the Tour de France this week when he joined Team Dimension Data for Qhubeka’s World Tour team.

The dream that first took shape when he began riding just nine years ago has driven the 21-year-old raised in the Capricorn settlement in Muizenburg. He is regarded as the next “big thing” to come out of Africa, having earned high praise from cycling legend Steven Roche, amongst many others.

“It’s really an amazing feeling to finally be part of our World Tour team,” said Dlamini, who will be a stagiaire with the World Tour team until the end of the season and will be a part of the squad for 2018. “I’ve always dreamed of being part of this team. Everything just feels unreal at the moment with all the good opportunities I’m getting. I’d like to thank the Continental team for having my best interests at heart. It’s been really an incredible three years with them. I’m ready to take on the world now!”

Dlamini has made the most of his opportunities in his career thus far. As a 17-year old, he was challenging experienced professionals in the Cape Rouleur in the Western Cape. In June, he won the King of the Mountains category at the under-23 Giro d’Italia, a first for an African. Dreams are built on reality, and Dlamini has shown he is the real thing.

Dlamini has made the most of his opportunities in his career thus far. As a 17-year old, he was challenging experienced professionals in the Cape Rouleur in the Western Cape. In June, he won the King of the Mountains category at the under-23 Giro d’Italia, a first for an African. Dreams are built on reality, and Dlamini has shown he is the real thing.

“This team was built on a dream and to see a young rider like Nicholas, who came from limited means and opportunities to succeed and make it as a neo pro rider in Team Dimension Data for Qhubeka is truly special to witness,” said Doug Ryder, team principal of Team Dimension Data. “Nic has big dreams and has worked so hard to realise his dreams, focusing first on getting through school and then on his passion of riding his bike.”

Team Dimension Data’s Bernie Eisel, one of the most experienced riders on the World Tour, believes Dlamini has all the attributes to be a complete rider. “I spent the last two winters with him in training and he is an absolute professional and has a stunning character,” said Eisel. “He can climb well but he is super-fast in a sprint too. With a bit of leadership from everyone else in the team, learning from our experience, Nic will shine in the coming years, I have no doubt. I can’t wait to race with him.

“When you see where he comes from and understand his background, you begin to realise how much hard work it took for this young man to make it to the pros, and he did it all with a smile on his face.” 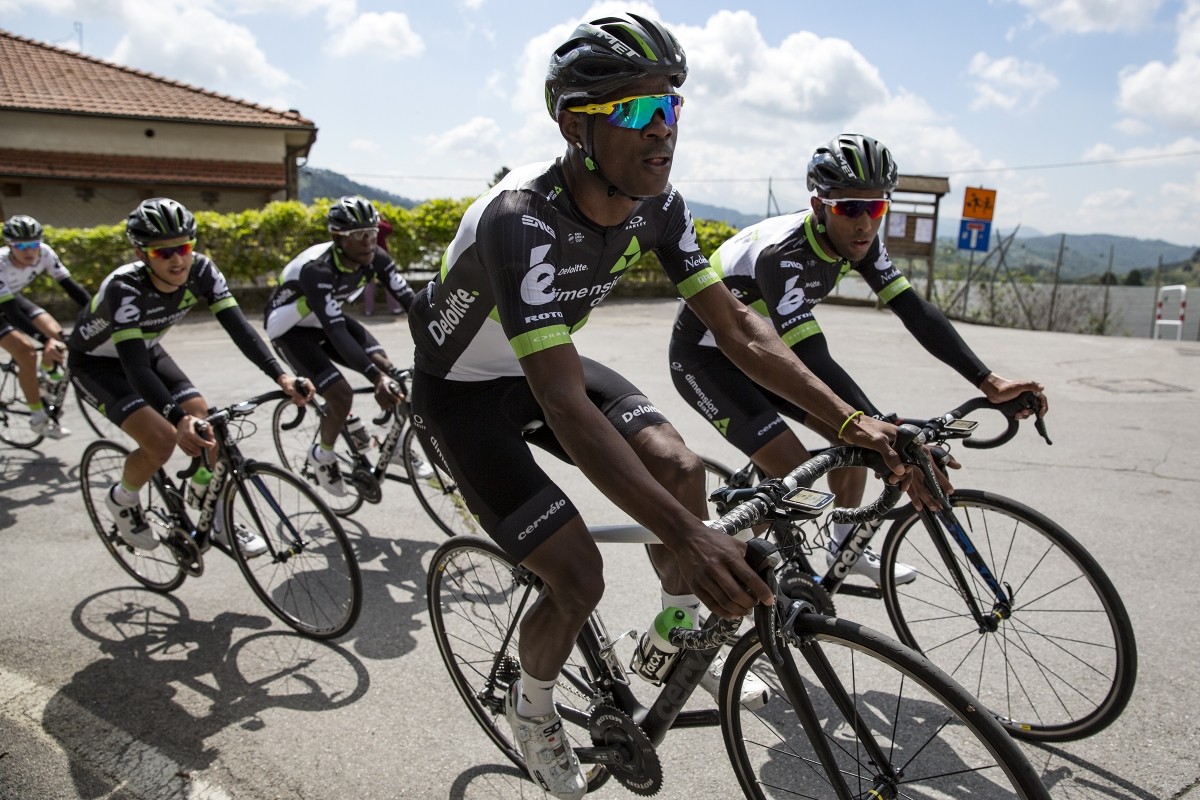 Dlamini has been supported by a series of mentors from Sipho Mona of Velokhaya, the Khayelitsha cycling organisation, the JAG Foundation, Vanessa Sandes, the actress and model, and her husband, Ryan, the ultra-distance trail runner, Sven Thiele of Hot Chillee Events, JP van Zyl of the UCI’s Africa development hub, Ben Swift, the British Olympian and world champion, Laureus Sport for Good organisation, and, through his foundation, by Elton John, the legendary pop singer.

“I am so proud of Nic,” said JP van Zyl. “When I think of him and our time together. He was running a tight schedule between studying, training, learning to drive, and racing like a star and, most of all, I could always count on him as the best role model and ambassador for our team.”

“Nic is incredibly fortunate to have the most amazing influencers and mentors in his life but that talks to his character, his values, his bright, open and welcoming face that is always engaging, said Ryder. “It is so rewarding to see Nic graduate from our UCI Continental development team into the 1st division of cycling. It shows how important the development program of Team Dimension Data is and why we race to mobilise more people on bicycles through the Qhubeka charity. The charity that is a hand-up program where bicycles are earned and not just handed out. We wish Nic all the best as he embarks on the biggest challenge of his young sporting life.”

from "From the Township to the Tour. An African Dream" by Kevin McCallum