... AT THE HILL CLIMB CHAMPS WEEKEND

Calling all Mountain Goats (and anyone who likes stunning roads, award winning food and great company).

Join us for our Hill Climb Champs Weekender this October in the stunning Peak District to ride some of its most iconic climbs, including the (option of riding) Britain’s steepest road.

Once your legs have been well and truly tested on Saturday, Sunday’s spin will be to watch the UK’s top climbers do battle on the infamous Winnats Pass at the National Hill Climb Championships 2021. 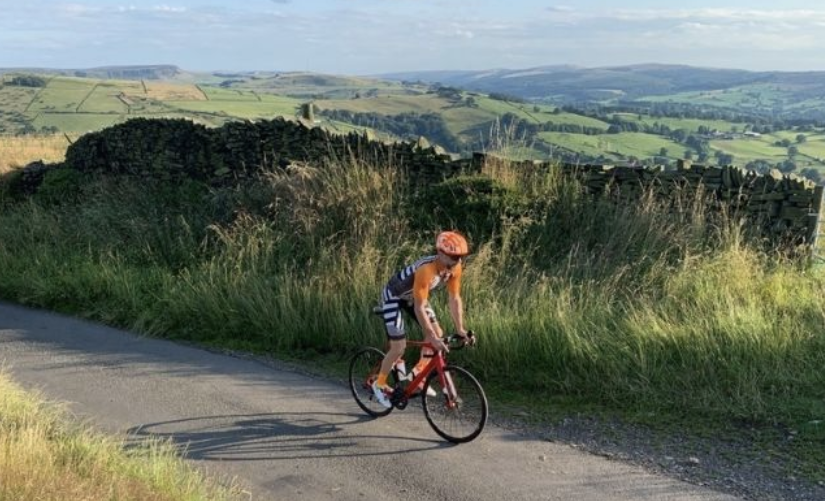 WHERE ARE WE HEADING?

We’ll be staying at the multi-award-winning Peak District pub-hotel the Old Hall Inn in the hamlet of Whitehough, you’ll be nestled right in the heart of the hills you’ll be tackling on your bike.

Hotchillee regulars will probably already know Nik Cook and, guided by him and the Hotchillee Ride Captains, you’ll be riding his local roads and drinking and eating in his local.

WHAT RIDING WILL WE BE DOING?

The accolade of the UK’s steepest road has now been claimed by the Peak District with the recent surfacing of Bamford Clough so there’s no way we couldn’t re-tweak our route for the Saturday ride to give you mountain goats a crack at it.

So this means, along with hitting three National Hill Climb summits, including this year’s iconic ascent of Winnats Pass, you’ll also bag this newly created must-do climb. You’ll log over 2000m of climbing in the 108km route but, if you don’t think you’ve got the legs, lungs and gears for a 35%+ wall, there’s a bail-out option which only loses you 5km and 210m.

There will be a couple of options for Sunday depending on how your legs are feeling. Both routes will take you back to the bottom of Winnatts to soak up the atmosphere of the National Hill Climb Champs. Neither are flat but the longer (circa 60km) one has a few real stingers in it. It’s then 12km back to the Old Hall Inn before heading home.

There’s also scope, if you don’t feel that will be quite enough climbing and you’re planning on getting up to the Peaks early on the Friday, to join Nik for a real “locals” ride in the afternoon. It’ll only be a couple of hours and not an official part of the weekend but expect 20%+ ramps, cobbles, maybe some light gravel and over 1500m of ascent.

WHAT IS THE HILL CLIMB CHAMPS?

Hill Climbs take place during a short season in the late autumn on courses from open moorland of the Stang in North Yorkshire to urban events in the heart of London and Bristol. The Hill Climb season culminates with the National Champs at the end of October.

With road racing and time trialling season ending and cyclocross just getting going, October is a bit of a transition month and Hill Climbs have traditionally filled that gap. The Catford CC climb in Kent is the oldest continuing bike race in the world dating back to 1887. They’re a social end to the racing season, with a party atmosphere to go alongside of the purgatory of the riders.

Hill climbs are simple races against the clock. Riders are set off, usually at one minute intervals, from a held standing start at the bottom of the hill and just have to get up it as fast as possible. Courses vary from short and extremely steep to longer sustained drags. This year on Winnats Pass will be really special as it’s especially brutal and a real natural amphitheatre that looks like a landscape from Lord of the Rings. There will be an enthusiastic and vocal crowd and, for the riders, it’ll feel as though they’re riding through a tunnel of noise.

Hotchillee will be heading up to the Peak District for 29th – 31st October 2021.

For accommodation we have rooms reserved at The Old Hall Inn and adjoining Paper Mill Inn. These are available on a first-come, first-served basis and can be booked directly with Dan here or by calling 07595 514466. Please make sure you mention Hotchillee when booking.

On the Hotchillee platform make sure you’re checking in on the #hill_climb_champs_weekender channel for tips on bike and body preparation and banter before the weekend.