"...about as much fun as you can have in your garage"

I must confess when Sven first floated the idea of a virtual version of the PPA Double Century on RGT as we couldn’t put a team in for the real event this year, I nodded my head, said the right things but sort of reckoned that we’d never find ten willing volunteers to sit on turbos for five toss hours…….Last weekend though, as we finished a recce ride of the first 103km of the route, it really sunk in that this would be my backside’s grim fate the following weekend.

During the first lockdown, I’d ticked the box of a virtual 100-mile race but that’d been on a pancake flat course on Zwift, in a big bunch and, although ridden hard, it’d taken well under four hours. Even that though had trashed my undercarriage and the thing with riding in a virtual world as opposed to IRL (in real life) is that you never really ease off the pedals – there’s no let up. A 5-6 hour effort, which our recce had indicated, was going to be a whole new level of discomfort.

My alarm went off at 0500, I groggily ate a huge bowl of porridge and went back to bed for another hour. At 0615 my second alarm sounded, I dragged myself out of my pit again and already the team WhatsApp group as abuzz with messages. A 12-shot Bialetti kicked me out off my torpor, the little boy’s room was successfully visited, six bottles of Beta-Fuel made up, lashings of chamois cream applied and I was ready to go.

Out into my gym and I fired up my fan, RGT and Discord. I was also running Zwift in parallel as I couldn’t handle spending that much time on a turbo and not being credited with my XP Points and Drops – the Peak District may have experienced slight power and internet drop-outs. 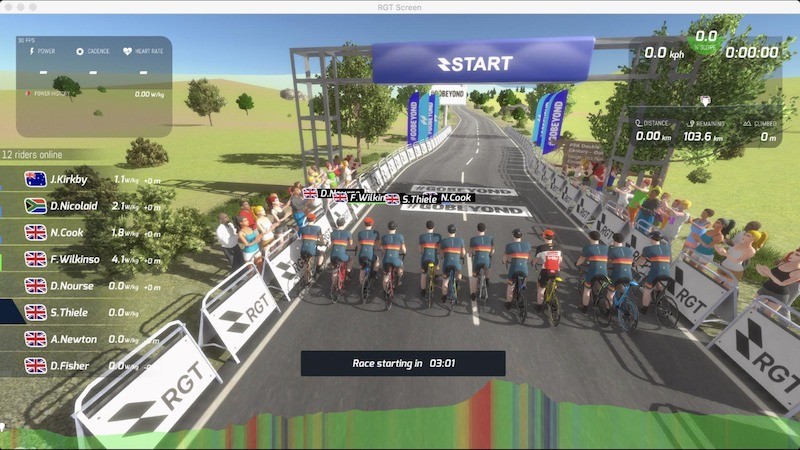 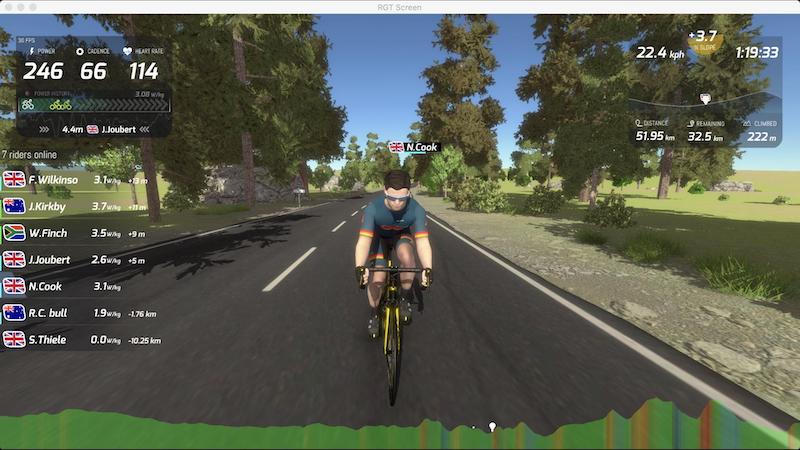 On the gun, there were some of grouping issues but, with Bull showing great cat herding skills on Discord, we were soon came together as a blob. After just 10 minutes were had out first virtual mechanical with Dan getting kicked off the system and unable to get back in. Magnus Backstedt, Andrew and Darren Nourse started putting in solid pulls on the front as they weren’t intending to do the whole ride but, even at this early stage, Felix was also driving the train. Bull was doing the very difficult and energy hungry tail-gunner role and I was waiting to drop back and pull any decoupled riders back on.

25 minutes in, Darren Nourse got gapped due to tech issues and, at the speed we were travelling, was soon 300-400m back. I was dispatched back but, just as I got to him with the gap now out to 500m, he’d been unable to resolve his IT issues and pulled the plug. The chase back on was a bit of a shock to the system at that time in the morning and it was a bit relief to get back in the wheels.

With about 30km ridden, we hit the first significant bump of the day and, as agreed beforehand, settled into a steady 3 w/kg. Unlike an individual TT where the fastest tactic is to push hardest when you’re going slowest, on climbs and into headwinds, in a TTT, where the draft effect on climbs is practically zero, you have to ride to the pace of the slowest rider. We stuck together well but, as we crested the climb, Andy’s avatar came to a grinding halt and, as he was only able to ride for an hour anyway, he bowed out.

The next 30km was a long steady drag and, with Felix and Magnus Backstedt on the front we made great time and, despite a few rescue missions having to be dispatched, lost no more riders. We then had the big climb of this leg but despite, sticking to our plan, we lost Ride Captain Dimi who was just having one of those bad leg days.

We then had 40km of mostly downhill until the end of the leg and, on RGT, with high speeds come different issues. You get a fantastic and really realistic draft in the wheels but, when a gap goes, it really goes! Just a moment’s lack of concentration and you can find yourself spat, out of the draft and facing a near impossible and match burning chase back on. Felix and Magnus Backstedt kept pulling through, I rode a few more rescue missions and, in a time of 2:54, we crossed the line eight minutes faster than on our recce ride the week before.

We had to say goodbye to Magnus Backstedt , it’d been a real honour to ride with him and, unsurprisingly, he’d put in some big turns. Following the IRL event we then had a 45-minute/15km neutralised section and this is where IRL is considerably simple and less challenging than the virtual world. We had to end our current ride, join a new one created on the fly by Sven for the neutral zone, do any off the bike faffing – fresh kit, re-lubing of undercarriage and the toilet for me and the log-in again.

Jack, Felix, Wayde and I were prompt and started spinning the neutral section together. Jannie and Bull were a bit more leisurely in their approach/second breakfasts and started pedalling a bit later. We spun really easy at 1.5-2 w/kg but this presented its own issue. With less pressure going through my pedals, my already tender gooch bore the brunt and, although only 28 minutes, it as probably the most uncomfortable section of the ride! 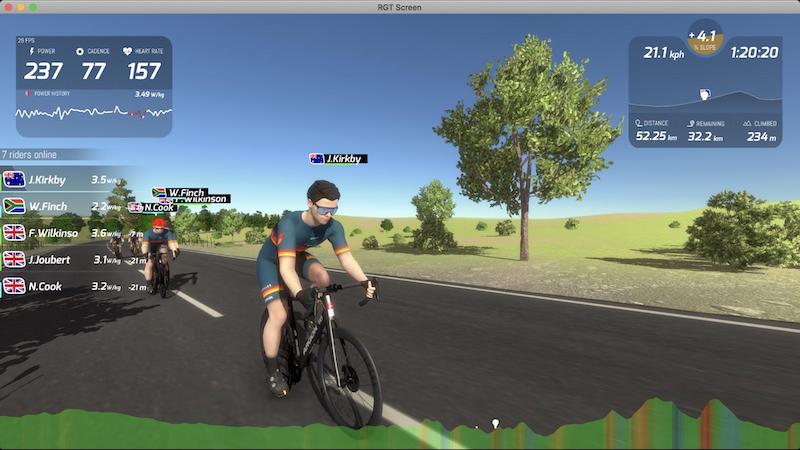 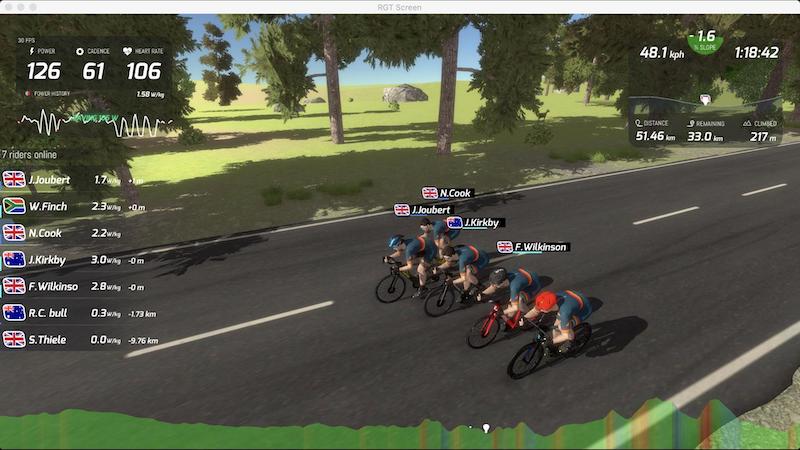 and then there were six...

With the clock ticking on our start-time for the final leg, Bull and Jannie got the neutral section ridden but then we all had issues loading and logging on for the final 84km leg. I had a bit of a tech rage hissy fit but, with Sven in his virtual team car calmly creating a new link and getting us all to re-boot, we were on the start-line and ready to ride.

For the final section we were whittled down to just six, Bull, Felix, Jack, Wayde, Jannie and myself. Under the rules of the event, we had to finish with five and so there was little room for error – either virtual or physical.

As the timer counted down, you could tell that myself, Felix and Jack all race regularly on Zwift as we were at 4 w/kg before zero. This led to an immediate split and a bit of a stuttering start to our final leg but, once we’d regrouped, it was time to take advantage of another 40km of mostly flat and downhill roads. We flew this section, largely due to Felix, but I had a sense we were right on the limit of cohesiveness. A few spiky climbs in the next 10km proved this and gaps opened and then had to be closed when the road tipped back downhill.

With 58km of this leg covered, the climbing really started with the “Three Bitches” standing between us and the finish. It was on a downhill that we lost Bull. His constant work tail-gunning had finally taken its toll and, with a 400m gap opening in no time, he waved us on and handed the Road Captain’s armband to me.

So, this was it, two Bitches and 20km left and we were down to our final five. I knew with legs tiring that it was going to be a case of damage limitation on the final two climbs and, to the soundtrack of Jannie puking into and plastic bag and cramping badly, we dug in. The second Bitch was, well, a bitch. Jack and Wayde tapped out a solid tempo upfront and Felix and I stuck with Jannie to drag him back on on the descent.

At the start of the final Bitch, I requested that everyone might fancy a spoonful or two of cement and we tried to keep the gaps as small as possible. We dragged Jannie back on in the first kilometre of the descent and then, with Felix and I trading 4-4.5 w/kg pulls, it was full-bore for the next 7km. A cruel uphill kick for the final 500m was a nasty sting in the tail but we backed things off to stay together and, in a race time of 5:17, crossed the line as one. Back down the road and, clawing us back on the climbs but missing the draft on the descents, Bull hadn’t thrown in the towel and finished strong.

Wayde, who’d ridden the real-life Double Century, had pondered which was harder and, although he concluded that IRL was harder on the legs, he reckoned the 100% focus and concentration required not to be gapped riding in the virtual world and the leg-shredding or ride ending consequences if you did, added significant layers of difficulty. I’d averaged 250w (3.12 w/kg) but I totally agree with Wayde , the mental energy required made it feel harder than the numbers suggested.

It’d been surprisingly fun though, the time had passed amazingly quickly, I can now say I’ve ridden in a team with a Paris-Roubaix winner and the final 20-30km were really memorable for the teamwork and rider spirit. There are already mutterings about next year but personally, I’m up for a trip to Swellendam!