Memories of london-paris 2012 and Danny Turnbull

Juliette Clark wrote this for Danny’s two young sons so as they grow up they will understand what a truly amazing person their father was.

I first met Danny Turnbull in the spring of 2012. It was part of the training for an epic journey to come, though none of us knew then just how incredible it would be. In the previous months Danny had been instrumental in persuading otherwise sane people that the challenge of riding from London to Paris in just three days was achievable. The team from Stewarts Law and the Spinal Unit at Stoke Mandeville had signed up to the Hotchillee LONDON-PARIS event taking place on 21st-23rd June 2012.

This is an event aimed at the serious endurance rider, on the bucket list for wannabe pros, not something previously considered as feasible for hand cyclists, not in this format at least. But with Danny involved, all these preconceptions were to be confronted.

Perhaps none of us fully appreciated how tough this was going to be, maybe if we had the whole project would never have got off the ground. But then Danny had the bit between his teeth and beneath that angelic, choir boy face was a will of steel. So the hand cyclists and team of upright riders, only a few of whom had any cycling experience, congregated each month between January and June to participate in the Hotchillee training rides.

In my capacity as a trainee Ride Captain for Hotchillee it was my job to guide, mentor, motivate and generally keep everyone safe on the roads. I, together with my colleague ‘DT’, was involved in the April, May and June rides. Over these outings, and as the mileage ramped up, and the heat of the day did too, so we all started to appreciate the enormity of the task. An unseasonably hot day in late May, with Danny and Susie just back from their honeymoon looking wonderfully tanned and relaxed, was a big eye opener to the organising team as Danny’s inability to sweat highlighted just one more reason why this was such an colossal undertaking.  We were out for 8 hours in 30 degree heat, dousing Danny with water but still he never uttered a word of doubt. Planning emails flowed that evening to ensure that extra water would be available in the support van on the event and we moved on. 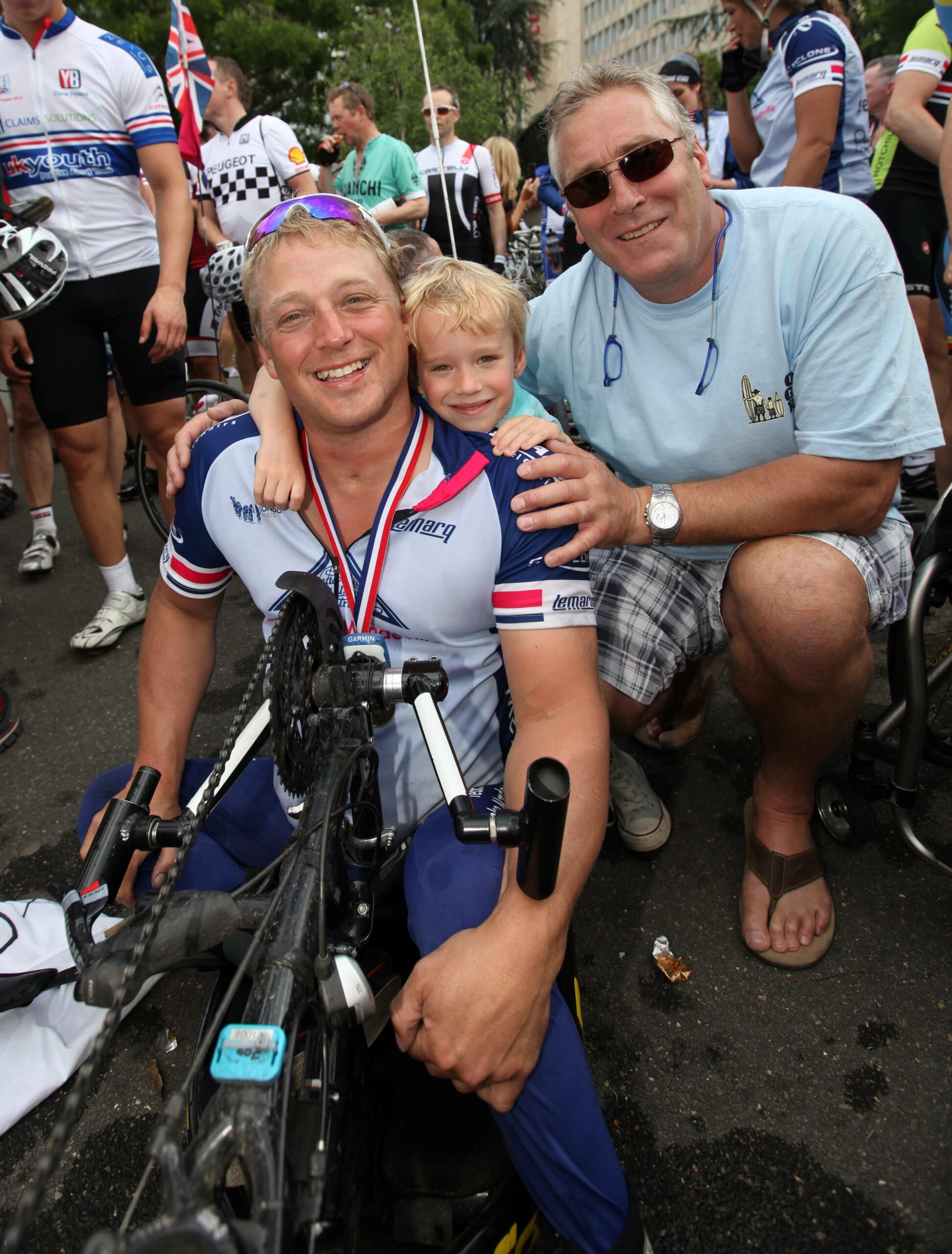 The final training ride, just a couple of weeks before the off, threw up more pressing issues. The route was long, hard and hilly and we were incredibly slow. Following this, there were serious doubts raised as to whether we could actually make the distance within the time constraints. Perhaps the target pace of 20kph that was required was just too big a call? More frantic emails were exchanged in the next two weeks yet Danny stood firm in his belief and we found ourselves on the start line at 5.30 am on Thursday 21st June 2012.

Riding 507km in 3 days is no mean feat for any endurance athlete, but for Danny, Alan and Luke, all with spinal injuries this was going to be a monumental task. We all sensed that we were on the brink of something special but I am sure none of us had any idea just how hard it would be. That we were even there in the dark, in the rain, on that first morning is testament to the will of these brave men. 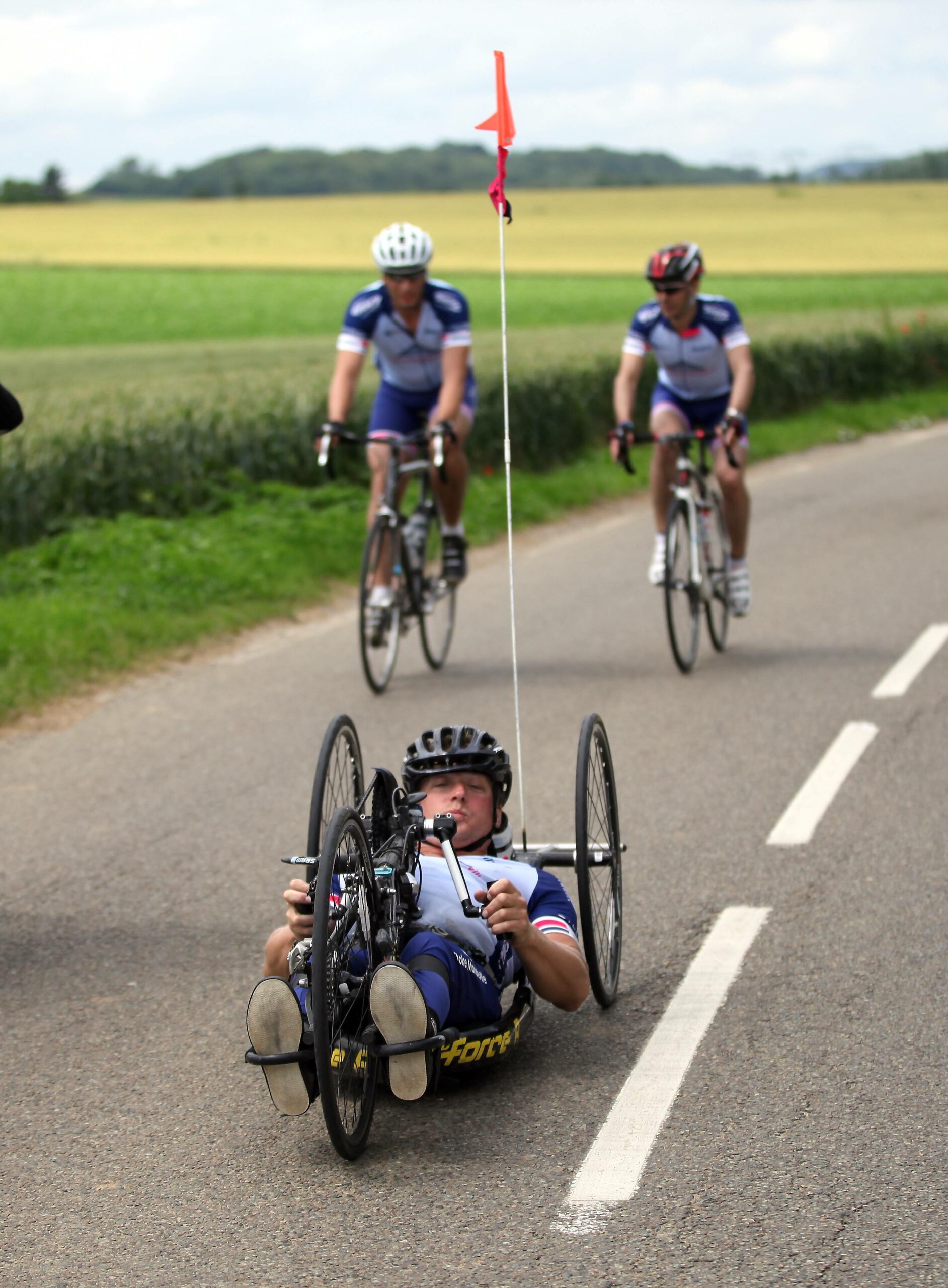 What followed was truly a test for every single person involved.  We had the worst weather imaginable thrown at us on the first two days and, for the hand cyclists the hills were tough and relentless. Our average speeds were slaughtered and we missed the ferry booking to take us to Calais. A frantic reshuffle saw us booked on a late crossing, but this meant arriving at the hotels around midnight and then waking the next morning before 5 am. Day 2 brought even worse weather and it took us over 12 hours to reach our destination in Amiens. The whole of our group were utterly exhausted arriving at the hotel. There was relief that we had made it through a second day. Yet the third day loomed over our heads, and most doubted we would make good enough time to join the main peleton for the victory procession into Paris. Closing roads in a major European city is not an easy task, the timings had been negotiated months in advance and there was no room for manoeuvre. At our rate of progress these past two days we would be too slow to get to the outskirts of Paris in time. Some, their bodies and spirits broken, were ready to give up.

But with difficult decisions to be made, Danny was not prepared for his dreams to be shattered and together with the Ride Captains a plan was forged out; cut off times were set at regular intervals along the route for the final day, and as long as we were ahead of these we could keep going. Failure, and we would be pulled off the road. An early start the next day meant little sleep again, but every person knew what was expected of them. Most of the upright cyclists had already travelled further into their mental and physical reserves than they had ever expected, yet they knew that what they felt could never compare with what Danny, Alan and Luke were experiencing.

We got off to a great start, the sun finally shone on us, the peleton worked as a slick professional unit and the hand cyclists gave every fibre of their being. We all felt invincible, that we were not to be broken. At one stage, as we crossed the rolling plains of France, Susie and I formed an arrowhead formation with Danny nestled in our slipstream, and we smashed out mile after mile, as poetry in motion, all our energies focused on the one end goal. We rode faster than ever before as the collective will gave us all hitherto unknown power. And yes, we reached the goal, we beat all the timing points, we beat all expectations and that day it seemed that we had pushed the extremes of human endeavour to new levels.  Danny had a vision, he had a dream and he made it his own. What he achieved despite the many medical implications of his SCI is frankly remarkable.

The last few kilometres into Paris were an emotional rollercoaster. Danny, Alan and Luke led a 450 strong procession of riders along the cobbles of the Champs-Élysées, past the Arc de Triomphe and finished triumphantly under La Tour Eiffel. Uncontrollable tears flowed freely as too did just a few bottles of champagne. 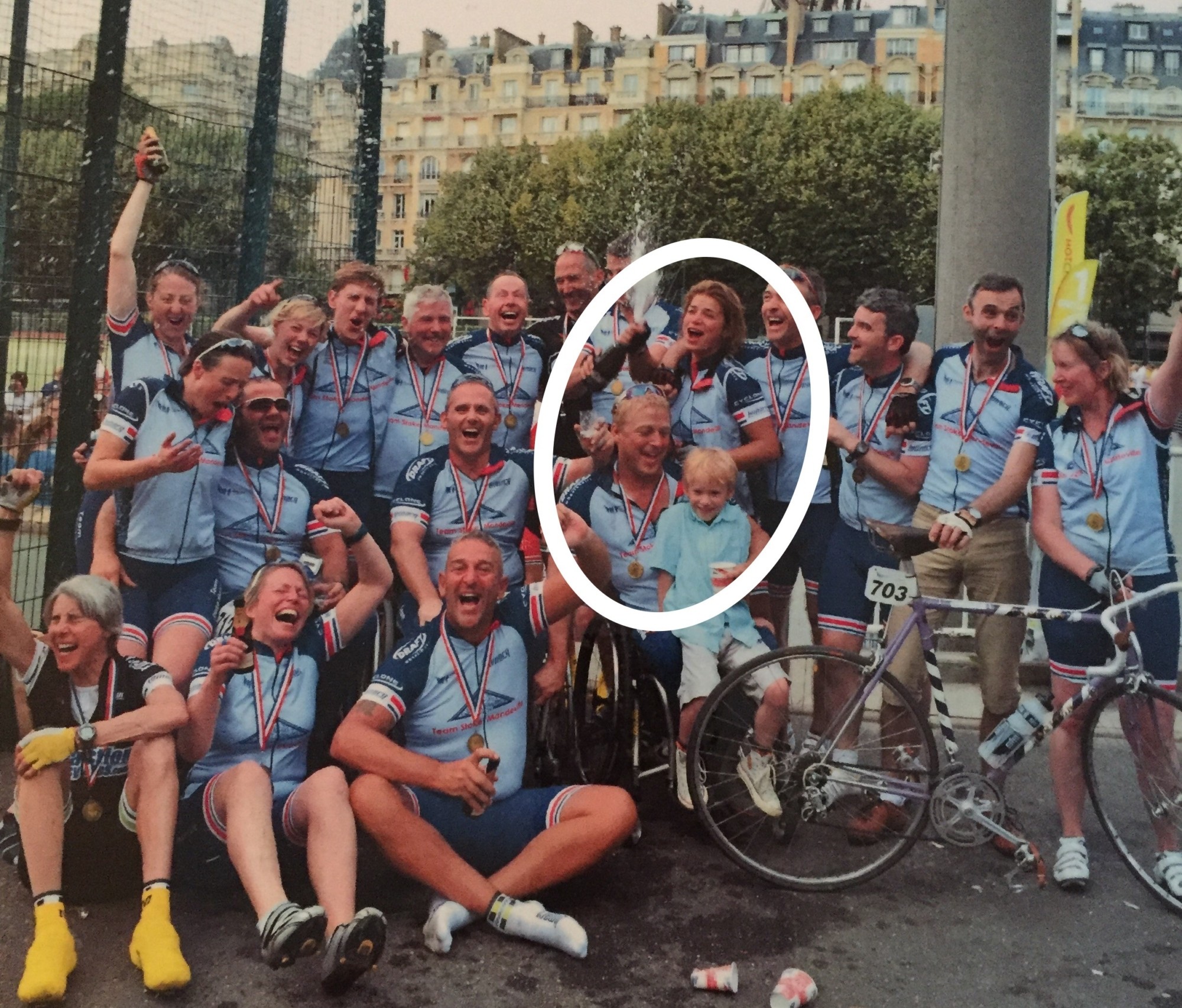 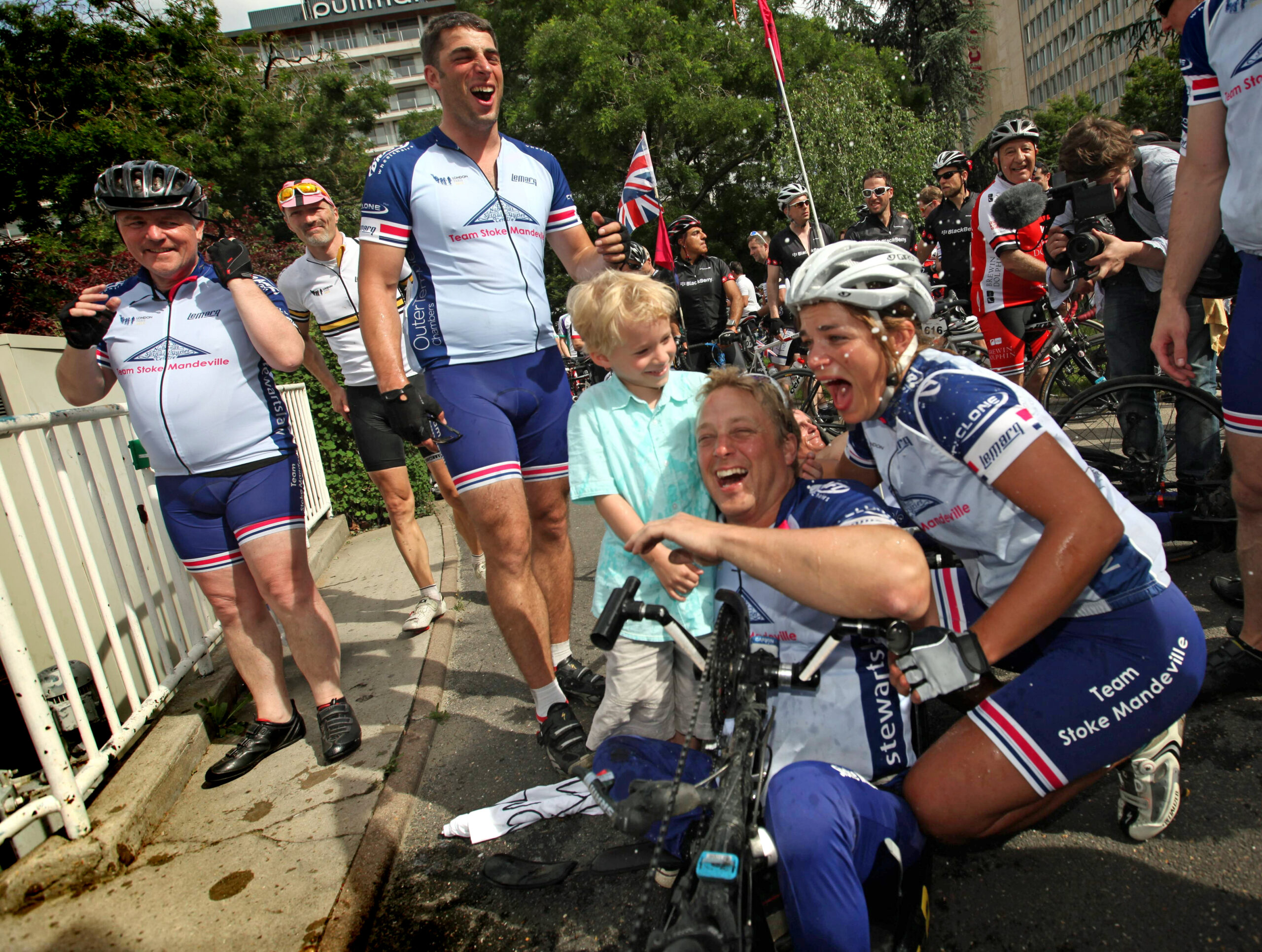