This time next week two hundred LONDON-PARIS riders will cross the start line ahead of the women’s peloton for the first ever Tour de France Femmes avec Zwift.

As we ride through Paris on closed roads from the foot of the iconic Eiffel Tower to the hallowed cobbles of the Champs-Élysées, we hope that this will be a pivotal moment in women’s cycling.

We will be privileged to ride out with a remarkable group of “Bad Ass” female cyclists who have played a significant role in making this happen. Formed in 2019, the “InternationElles”,  brought together amateur female cyclists from around the world. They completed every stage of the men’s Tour de France in 2019 and in doing so put down a maker for greater gender equality in cycling.

Louise Vardeman, the co-founder of this incredible group of female cyclists will be joining us. She’s is an inspirational athlete, championing equality and opportunity for female cyclists. Here’s what she had to say as the big day approaches. 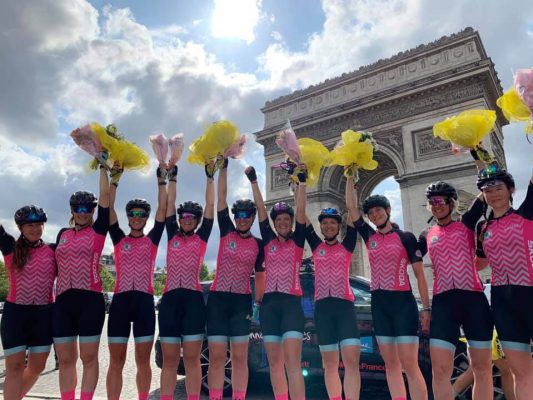 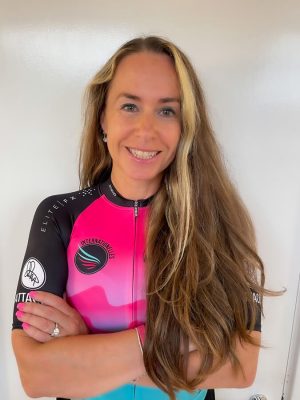 In 2018 Louise Vardeman saw a call out online from a group of French women who had been riding the Tour de France a day ahead of the male competitors. When the French ladies decided to ride as a French only team this led to Louise co-founding an International Team with the women she was put in contact with.

They met for the first time in Brussels in 2019 then set off the next day to ride the full 21 days of the Tour de France as ridden by the men.

Why did your ride have such an impact?

Because we were a worldwide team, we got unbelievable amounts of media coverage and attention for what we were doing because people just didn’t realise that there wasn’t actually a women’s Tour de France. People thought there was one but it wasn’t televised.

So we were starting a conversation proving that if amateur women with day jobs and children could ride the Tour de France then why on earth would the professional women not be given the chance to have a similar prestigious race?

We were 10 unknown amateur cyclists getting a huge amount of attention for a cause that we believed in so much.  And it also cost us a huge amount financially to be there (from accommodation to food and for me a month away from my boys).

Our plan was to go back the next year and the year after that to carry on with our campaign but then of course COVID struck and as an International Team we weren’t able to travel.

How physically tough was it?

It was awful. I’d never done anything like it before. I’d done some big events like the Etape and I’d geared up for months for that one day. And that was so hard I thought what on earth am I doing.  I’m planning on doing 21 stages of The Tour back to back.  I’d never ridden as long as stage three was going to be and then stage four was even longer. I think my longest ride had not even been a hundred miles.

I don’t think I went into it underprepared but I certainly didn’t know how it would be riding all those hours each day and then the next day and the next day after that. Day three was 230 km, which I’d never done before.  The next day was 235km and then it went down to 215km.

When the mountains came, it became an eating contest. You couldn’t eat enough. We were burning 5000 to 6000 calories a day. We weren’t racing but we weren’t hanging around either as the longer we took then the less recovery time we had in the evening.

We were probably exercising for nearly 9 or 10 hours a day, getting into bed at around midnight and then up again at 5 the next day to do it all over again.

It was exhausting but because we had such incredible support it spurred us on.  We realized we were making a difference.  People were asking questions about why there wasn’t a Women’s Tour de France and that  kept us going.

Looking back on it, what was the highlight?

Finishing!  I’ve always loved France. Paris is so beautiful and I studied there for a year.  That bit cycling up the Champs-Élysées, to the Arc de Triomphe, I get goosebumps thinking about it now.   It had been our focus for all those hours through pain and tears and everything to get there.  We got there, did a lap of the Arc de Triomphe and at that point Rob, who was my boyfriend at the time and a support driver for us, proposed.  Everyone went crazy.  It was incredible. And of course I said yes.

Was there a low point during the adventure? And what did you do to push through?

There were definitely low points throughout.  Thankfully, we didn’t all have low points on the same day because any time someone’s mood started to dip or they went quiet or burst into tears as often happened then we’d rally around them and you got to know very quickly how people wanted to be treated. Some people wanted to be left alone, to have a moment and others wanted a hug.

Don’t underestimate how important touch is and giving someone a cuddle. We really did start hugging and holding on.  That helped, we were in it together. We were all suffering but luckily at different times.  And different people had different things that would set them off. Everyone had a wobble. 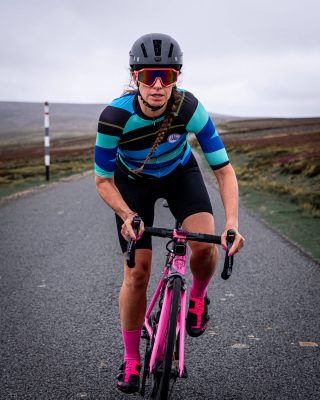 So for someone who’s about to get off the bike at an event what would you say?

Unless injured or medically advised to do so, if it’s your brain telling you to stop, don’t get off the bike because you will regret it. I knew that if I got in the support van, or didn’t do one of the stages then I would regret it because I wouldn’t have been able to say I’ve done the full ride of the Tour de France.

You’ve got to keep the reason why you’re doing it in the first place in your head. So when those tough moments crop up you can remind yourself why you’re there. You’ve come this far. The hardest stuff is getting your kit on and getting out the door. Once you’re out you’ll be OK. It’s about keeping your head positive because it doesn’t matter how strong your legs are, if your head’s not there you’re not going to be able to ride.

I think often it’s about proving people wrong.  It’s proving that we, as women, can do anything we want to do just as good as and often better than the boys.  It spurs me on to show we can and to show we deserve to be in that space as well.

And for the newbie cyclist, what bit of kit is key?

I think it has to be padded shorts without underwear!  That and a bike fit to make sure that the saddle is at the right height for you so you can reach the handlebars and brakes comfortably and for safety. Actually chamois cream also on longer rides. 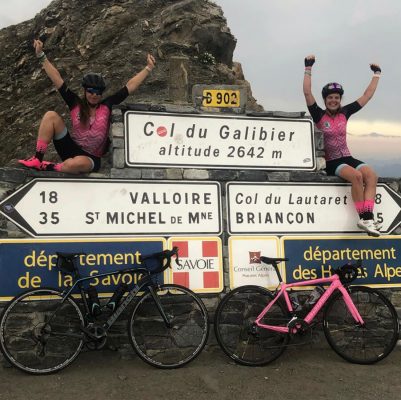 How excited are you?

I can’t wait. I’ve never done LONDON-PARIS and it’s always been on my to do list.  I’ve heard a lot about the Hotchillee ride and what a great combination it is to ride from London to Paris then to finish at the men’s Tour de France.  So to do it for the first time, finishing in Paris and to see the start of the women’s Tour de Femmes, something we fought so hard for, it’s the coolest thing to do. We’ll be meeting up with Hotchillee where the gravel and road groups join towards the end.  Then we’re all riding into Paris together.

So how many of the InternationElles will be riding into Paris?

There will be three of the 10 original InternationElles riding. Then we’ve got two girls who joined when we were looking for new members two years ago. Two new suckers!  Out of the 10 who did the Tour originally, for most of us it was actually a once in a lifetime event. It’s so difficult with work and the commitment/sacrifice/cost involved is so huge.

What does the first ever Tour de Femmes avec Zwift mean to you?

Everything, it’s the women’s chance to have their stage. Their opportunity to have a prestigious race like the Men’s Tour de France.  Its women starting to have similar opportunities as the men.

It’s not the same because it’s not the same length as the men’s Tour de France which is 21 days and is the biggest sporting event I think in the world across all sports.  That’s just enormous, the sponsorship and everything that goes into it.  It isn’t a total Tour de France but more of a Tour de Northeast France. But it’s a starting point …. 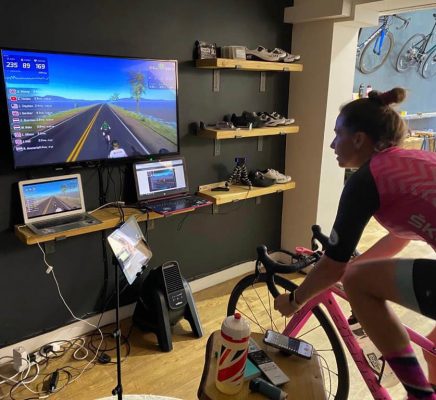