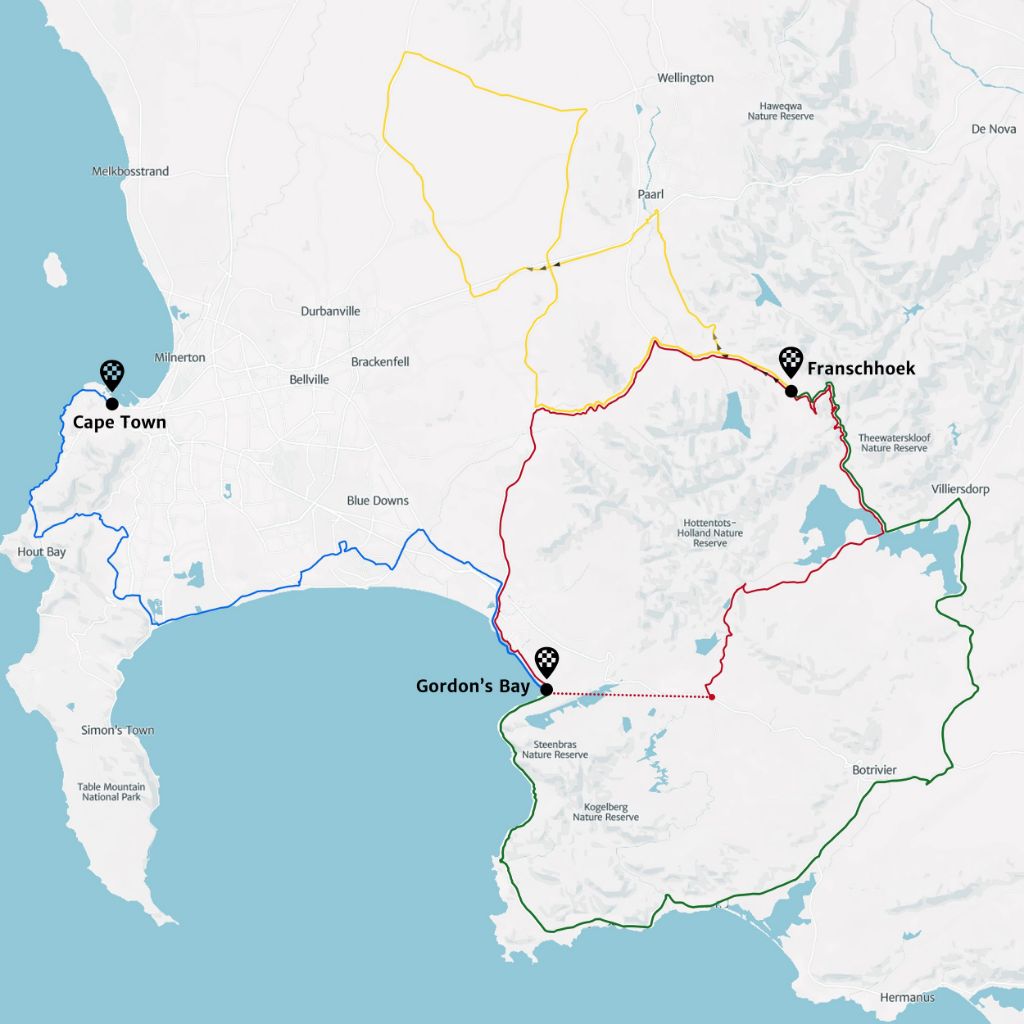 A short, sharp, lung busting effort starting on Robertsvlei Road, roughly 1km from the race village, to the Berg River Dam and back to seed riders for the stages ahead. Whether you’re a race snake, or just racing your mates, this time trial counts towards your overall General Classification (GC) placing. Be sure to keep some gas in the tank for the climb on the way back to the finish!

Stage 1 takes the peloton out to the rolling farmlands of the Swartland region, after an optional short stop at the Drakenstein prison, site of Nelson Mandela’s release in 1990. Back on the bike, it’s a gentle spin on comfy roads until kilometre 39 – the Green Sprint section for the race snakes. A 1km uphill drag just enough to hurt the legs and get the heart pumping. Enjoy the short respite to kilometre 74 – before the racing starts in earnest with the first Yellow GC section of the 2019 Cape Rouleur. Fourteen kilometres of undulating racing lie in wait, followed shortly by a welcoming lunch stop at the picturesque Domain Brahms Wine Estate. With full bellies and refreshed legs, the peloton heads back towards the historic town of Stellenbosch, where the climbers get the chance to show off in the Red Climb section, a 5km grind over Helshoogte pass. From there on it’s a false flat cruise back to Franschhoek.

At 114km, Stage 2 is the shortest of the 2019 Cape Rouleur but by no means the easiest. The route takes each group back to Stellenbosch and over the Helshoogte pass, through the town of Stellenbosch, and on to Gordon’s Bay. The next part of our route is over St Lowry’s Pass which is renown for it’s high winds and heavy traffic, so for this reason all riders and their bikes will be transported from Gordon’s Bay to Peregrine Farm Stall where lunch will be served.  Straight after lunch the road heads skywards once again, and the racing sections come thick and fast; first the 5 km Red Climb on Viljoen’s Pass, then some 11km later the pace ratchets up for the Green Sprint. There is little chance to waste thereafter as the Theewaterskloof Dam appears with the Yellow GC section coming within 1km of the left hand turn at kilometre 91. An 8 km section, this slow grind to the base of the Franschhoek Pass will test even the strongest riders with 2 climbs already in their legs. And to add insult to injury, even with all the racing done, there is still one final challenge of Stage 2, the 8 km climb up Franschhoek Pass. After enjoying the view from the top, the day’s work almost done, it’s a quick roll down to Franschhoek and recovery time

Stage 3 takes us through some of the most scenic and iconic routes in the Western Cape as we leave our base in Franschhoek for the last time and journey to the grand finale in Gordon’s Bay. Right from the start it’s up and over Franschhoek Pass as a rude early leg-tester. With the pass being the Red Climb section for Stage 3, this will really test those mountain goats in Groups 1 and 2 and is the last opportunity to win points for the Red Climber Jersey.  Once settled on the other side, a flat and fast section via Villiersdorp takes a southerly aspect into the final Yellow GC section commencing just after the 36km mark. 10 km of racing over rolling terrain will come down to an all out effort in the last 1km when the road  kicks up sharply, truly testing the merit of the GC contenders. Lunch at 65 km at Gabrielskloof where some shade and a refuel will be more than needed.  With a further 76 km of Stage 3 after lunch, however, there is no room for complacency. Turning south-west the Ocean calls, but beforehand 40 km of rolling roads beckon and the last Green Sprint at 101km. The frenetic nature of this section quickly gives way to the tranquil view of the Indian Ocean as we make the turn along Clarence Drive. Breath-taking scenery will provide sufficient distraction as the kilometres whizz by. In no time at all Gordon’s Bay will come into view, marking the end of Stage 3 and the beginning of the post-race festivities. The stunning Krystal Beach Hotel awaits, where the HotChillee crew will welcome riders! 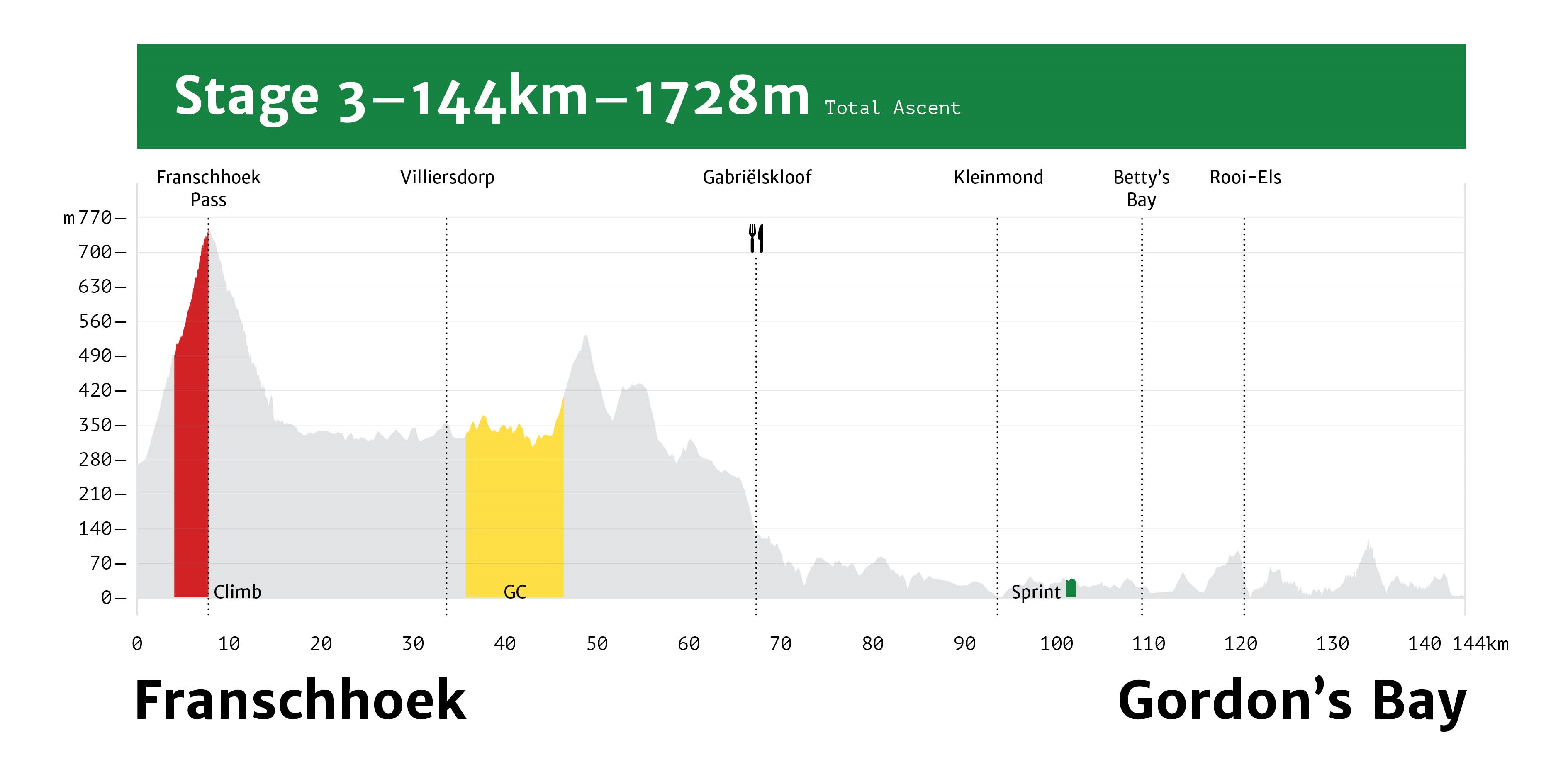 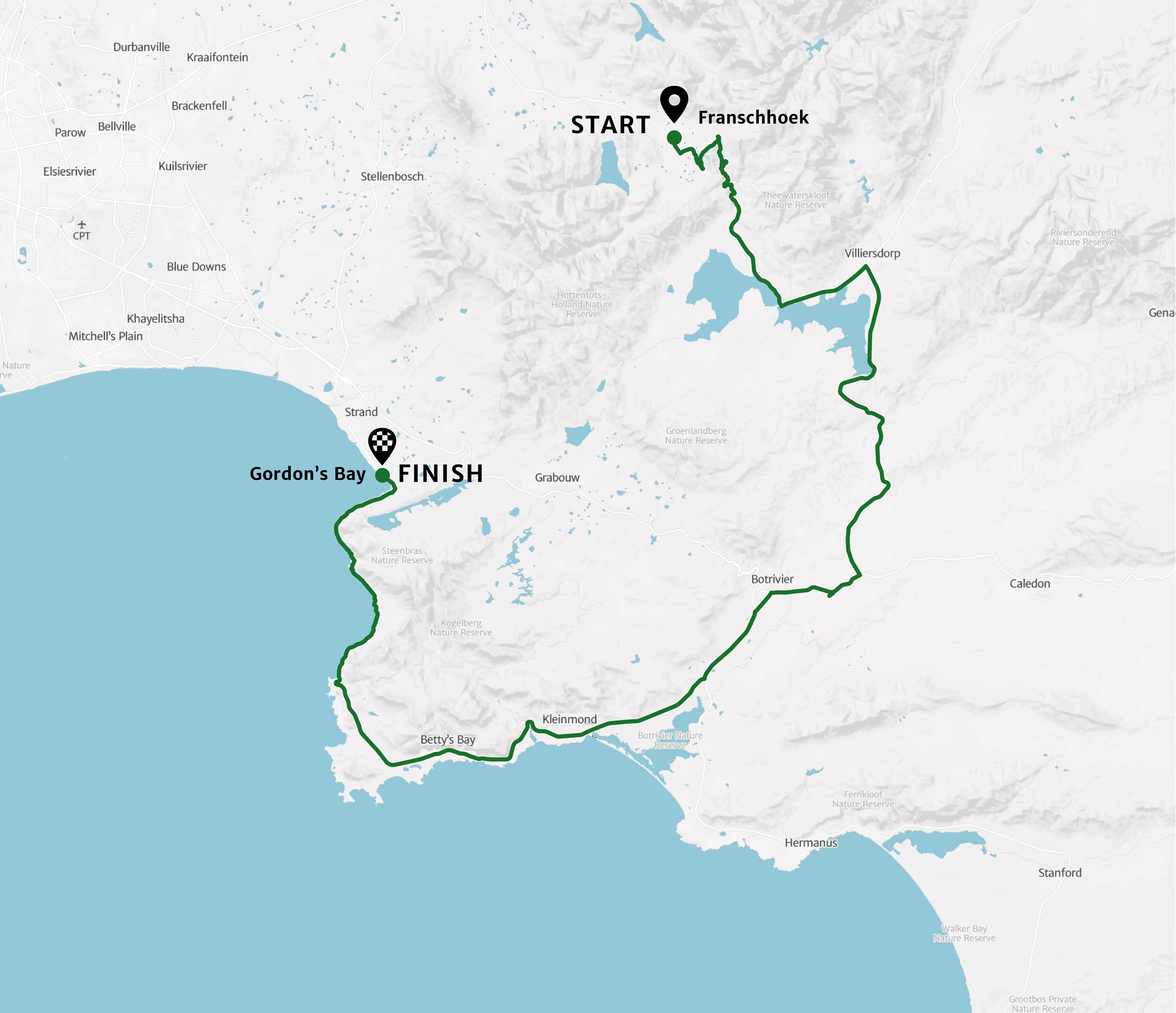 A slightly more relaxed ride, we depart Gordon’s Bay and head towards Cape Town. Our first stop is within the township of Khayelitsha where local traffic police will escort us to the inspirational Velokhaya Life Cycling Academy where we will stop for coffee. We return to the coast along Baden Powell Drive before turning north via Constantia Nek and Hout Bay. A predominantly flat route until this point gives way to a couple of testing climbs such as the famous ‘Cape Town Cycle Tour’ Suikerbossie climb but we will be rewarded by spectacular views across the Atlantic Ocean to our left and Table Mountain National Park to our right. Regrouping to form one large “Festive” peloton we then ride the final 9 kilometres along the route used by the Cape Town Cycle Tour. The Cape Town motor cycle police will guide us along the final stretch to the finish at Waterfront, where celebratory drinks and lunch will be served.